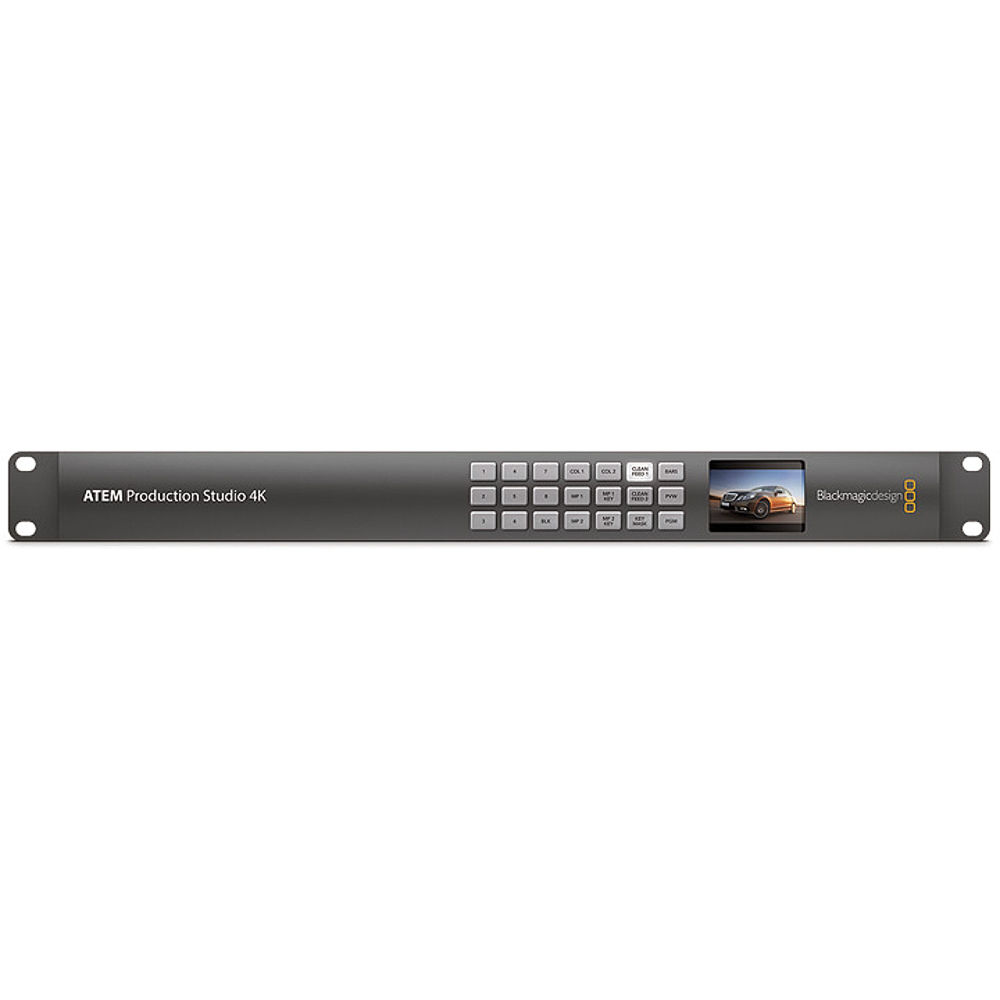 The Blackmagic ATEM 1 M/E Production Studio 4K is a live event multi camera production switcher with 10 individual Ultra HD inputs built into a 1RU chassis. Supporting NTSC/PAL/HD and Ultra HD video formats, the switcher connects to a wide range of cameras and sources, delivering a single program stream in SD, HD, or Ultra HD video. All this is done live and in real time with no rendering required. The switcher features a reference video input for synchronizing the switcher to other equipment using tri-level or blackburst sync. Each input also features its own frame synchronizer, which allows you to use cameras that do not feature Genlock as well as input video from computer sources.

The switcher provides 8 video outputs that are always active. It features two SDI and one HDMI Program output, both of which deliver SD/HD/Ultra HD, with one aux SD/HD/Ultra HD output that can deliver a clean program feed without any downstream effects. The switcher also features a down-converted HD output for monitoring on an SDI-equipped HD monitor. Multi view monitoring is 1080i only, over dedicated SDI or HDMI output, and multi view allows you to view the program, preview, and eight live sources at the same time. The switcher features built-in luma and chroma keyers for real time effects and composites in Ultra HD, with 10-bit processing. Two downstream keyers allow you to use two graphics/logos/titles/lower thirds from up to twenty stored graphics in a wide variety of formats.

A built-in twelve-channel audio mixer handles the embedded HDMI and SDI audio from the 10 active video inputs as well as audio from the balanced or unbalanced analog audio inputs to provide you flexibility and creative audio options. Audio output is embedded in the SDI and HDMI stream, as well as available via balanced audio outputs. Either a Mac or PC running the included ATEM Software controls the switcher′s operation and settings. For those who like the feel of a physical control panel, available ATEM ME 1 and ME 2 Broadcast Panels, connected via the Ethernet port, also control all the features of the switcher. Illuminated front panel buttons allow you to locally select the aux output, while a 2-inch LCD screen built into the front of the unit allows you to see the aux output for instant confirmation of the correct output.

The ATEM 1 M/E Production Studio 4K switcher supports 4K Ultra HD video (3840 x 2160), which is four times the resolution of Full HD. The video format is set by the user and must be the same across each input, as the switcher cannot scale different input formats to match the project format.

The switcher features ten single link 6G-SDI and one HDMI 4K input, which allows you to connect SD/HD/Ultra HD and computer-based signal to the switcher. However, the HDMI input is shared with one of the SDI inputs, so you can only have a maximum of ten inputs.

The switcher takes reference video in for sync timing, either blackburst or tri-level sync, so that it can interface with other post production equipment.

Each input incorporates its own frame synchronizer, which enables you to use cameras that do not have genlock capability or to input computer sources such as Keynote or PowerPoint Presentations.

The switcher includes a built-in 12 channel audio mixer that lets you manually mix sources or you can set mixer inputs to "audio follow video" so your audio crossfades as you switch between sources.

Multi view output is available via an SDI or HDMI connector.

The switcher features an SDI aux output that is capable of delivering the program out feed with or without the downstream keyer effects in SD, HD and Ultra HD. Control of the Aux output is by front mounted panel buttons, and built-in 2-inch LCD screen for immediate confirmation of the Aux output.

The switcher features four upstream keyers and a DVE, alowing you to layer live video, title, graphics and animation over live video. You can choose from chroma, luma, linear, and pattern keys at Ultra HD resolution with 10-bit processing.

The DVE allows you to create a picture-in-picture effect.

The ATEM 4K switcher uses an Ethernet connection to interface with control surfaces such as the optional ATEM 1 M/E and 2 M/E Broadcast Panels.

You set the format for each project you are working on, from SD to HD to Ultra HD, selecting resolution and frame rate. This is accomplished by using either the included software for Mac/PC, or via the ATEM 1 M/E or ATEM 2 M/E Broadcast Panel.

The switcher features a USB port that is used for software updates and to set the switcher′s chassis IP address, which can only be done by using a computer running the ATEM Switcher Utility connected to the switcher′s USB port.

The switcher is a single RU in height and has built-in rack mount ears, for mounting in a production road case or in a post production facility.