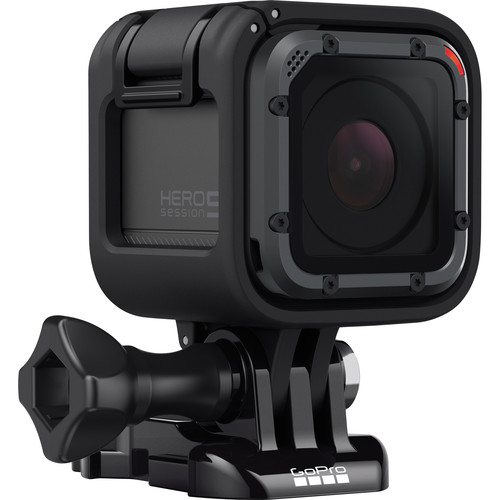 While it may be small in stature, the GoPro HERO5 Session action camera more than makes up for it in functionality and features. Retaining the familiar ice-cube-sized form factor of the previous generation HERO Session, the HERO5 Session ups the ante in a major way. UHD 4K video at 30fps and 1080p video at 90fps in addition to 10MP photos at bursts of up to 30fps are all packed inside the diminutive rectangular prism of a camera. The camera body itself is waterproof to depths of 33′ and is shock-resistant, so even without a protective housing, the HERO5 Session can take a licking.

Whether you want to clamp the HERO5 Session to a guitar headstock, boom it out on a selfie stick, or mount it to your surfboard, you will have all of GoPro′s separately available 3-pronged accessories to help get your shot. The included Standard Frame has an integrated accessory mount for securing accessories. To get you started, a mounting buckle quick-release for the Standard Frame and two adhesive mounts (one curved and one straight) with quick-releases are included.

While more functionality has been integrated, the HERO5 Session is still easy to use. The one-button interface, featured on the previous generation HERO Session, will be instantly familiar for accessing menu functions. If the camera is off, pressing the record button will power it on and immediately start recording. Hands-free control is also possible using the built-in Voice Control feature or the free mobile app. Speaking simple voice commands can control various functions inside the camera, including start/stop video recording, photo burst, and more.

Video Recording Modes
Select the desired resolution to fit your project. Record in UHD 4K resolution up to 30fps or switch to lower resolutions such as 1080p and 720p for access to higher frame rates, more FOV (Field Of View) options, and electronic stabilization. In 2.7K widescreen and lower resolutions, for instance, narrower FOV options open up, including Medium, Narrow, and the new Linear mode (only available in 2.7K and 1080p settings), which corrects the lens′s barrel distortion.

All video recording modes can be as simple or advanced as you want them to be. If you only want to ensure that a shot is captured, auto-exposure is at your disposal. For those who are shooting less off-the-cuff footage and want complete control, manual control of exposure is also available.

Photo Modes
Burst Mode: Bursts of photos can be taken during high-action sequences to ensure that you capture the moment. The camera′s buffer can fit up to 30 photos from a single burst, and burst durations can be set from six seconds to one second, effectively offering a 30fps burst of 12MP photos.

Time Lapse Mode: Record clouds floating by, traffic snaking through cityscapes, or stars and constellations tracing their way across the sky with the time lapse mode. Set your interval from a picture every 1/2 second to every minute for different effects.

Wireless and Mobile Device Connectivity
Bluetooth and Wi-Fi connectivity enable the HERO5 Session to interface with mobile devices and wireless accessories. Free apps from GoPro, CAPTURE and QUIK fully integrate the functionality of your HERO5 Session with your mobile device. CAPTURE offers live preview, playback, and full camera control over Wi-Fi. QUIK is a quick editing platform for easy trimming and sharing of your recorded videos.