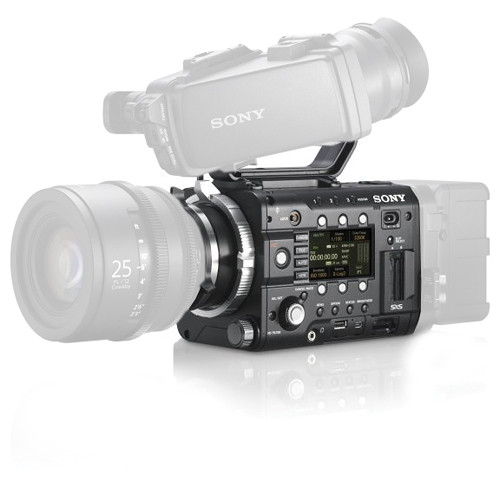 The Sony PMW-F55 CineAlta 4K Digital Cinema Camera features an 8.9MP Super 35mm image sensor, capable of capturing 4K, 2K and HD resolution video in a variety of formats via the camera′s internal recorder. The F55 is among the first digital motion picture cameras with a global shutter, which completely eliminates motion skew and other "rolling" shutter distortions. Sony has designed the F55 as the foundation of an exceptionally versatile, modular system.

Optional components¹ of the F55 system include bolt-on recording units, a series of digital viewfinders, and camera support rigs. Notably, the AXS-R5 recorder¹ can be mounted onto the rear of the F55, enabling 4K and 2K 16-bit RAW recording and high speed frame rates of up to 240 fps in 2K². In keeping with Sony′s mandate on versatility, the F55 will have a native FZ-mount, which will provide an interface for Sony′s SCL-Z18x140³ auto focus servo zoom lens as well as a wide range of lens adapters, such as the included PL-mount adapter.

Many digital sensors can match and even surpass traditional motion picture film for resolution and low light image quality, but with approximately 14.3 stops of dynamic range, film has maintained an advantage over most digital sensors. However, the F55′s exposure latitude is rated at 14 stops of dynamic range, for truly film-like rendering of highlights and shadows. Moreover, the F55 incorporates the same color filter array technology used in Sony′s flagship F65, for a color gamut that is even wider than motion picture film.

Electronic Global Shutter
Traditional CMOS sensors employ what is commonly known as a "rolling shutter." The F55 is among the first digital motion picture cameras with a global shutter, which completely eliminates motion skew and other rolling shutter distortions.

Highly Modular Design
In addition to the AXS-R5 recorder, a digital interface on the F55 allows for a variety of optional viewfinders. DVF-EL100 is a 0.7" OLED viewfinder with 1280 x 720 resolution. DVF-L350 is a 3.5" LCD viewfinder with 960 x 540 resolution, and the eyepiece flips up for direct monitoring. DVF-L700 is a 7" LCD viewfinder with 1920 x 1080 resolution for monitoring Full HD pixel-for-pixel. Other modular components include the optional Sony shoulder rig, which features industry-standard rosettes on both sides for quick and easy attachment of third-party hand grips and other accessories.

Native FZ-Mount and PL-Mount Adapter
The F55 is designed to accommodate a wide range of lenses. With the PL-mount adaptor, you can take advantage of acclaimed cine optics from Angénieux, Canon, Carl Zeiss, Cooke, FUJIFILM, Leica and more. Slip off the supplied PL-mount adaptor to reveal the native FZ-mount with an 18mm flange focal distance. The FZ-mount provides an interface for native FZ lenses like Sony′s SCL-Z18X140 auto focus servo zoom lens or a range of adaptors for still lenses, including Canon EF, Canon FD, Nikon F, Leica M and more.

Dynamic Range Rated at 14 Stops
The ability to render a range of exposure values from deepest shadows to brightest highlights is a crucial test of any digital camera. The F55 is capable of an impressive 14 stops of exposure latitude, low-light sensitivity and low noise in the blacks. The digital sensor′s dynamic range approaches that of traditional motion picture film.

Wider Color Gamut than Film
The F55 incorporates the same advanced color filter array technology as Sony′s flagship F65, for a color gamut that is even wider than motion picture film.

Intuitive One-touch Interface
Designed with significant input from cinematographers, the F55 features an intuitive interface for a range of controls. Instead of diving through menus, you get direct, one-touch access to key shooting parameters including frame rate, shutter speed, color temperature, ISO sensitivity and gamma. Assignable buttons mean that your favorite adjustments are always at your fingertips.

Long-life Olivine Battery and Quick Charger
The F55 takes advantage of Sony′s BP-FL75 battery pack, which uses Olivine Lithium Iron Phosphate instead of conventional Lithium Ion cathodes. The result is a substantial increase in charge-discharge cycles, compared to previous Sony batteries. The Olivine battery works with Sony′s BC-L90 quick charger. The camera is also compatible with Sony′s BP-GL95A, GL65A, L80S and L60S batteries, which use the BC-L70 and L160 chargers.